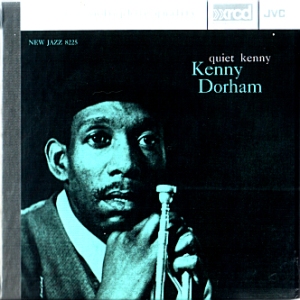 Review by Michael G. Nastos (allmusic.com)
In the liner notes of Quiet Kenny, former Downbeat magazine publisher Jack Maher states that trumpeter Kenny Dorham’s music is not necessarily the demure, balladic, rapturous jazz one might associate as romantic or tranquil. Cool and understated might be better watchwords for what the ultra-melodic Dorham achieves on this undeniably well crafted set of standards and originals that is close to containing his best work overall during a far too brief career. Surrounded by an excellent rhythm team of the equally sensitive pianist Tommy Flanagan, emerging bassist Paul Chambers, and the always-beneficial drummer Art Taylor, Dorham and his mates are not prone to missteps or overt exaggerations. One of Dorham’s all-time best tunes “Lotus Blossom” kicks off the set with its bop to Latin hummable melody, fluid dynamics, and Dorham’s immaculate, unpretentious tone. “Old Folks,” a classic ballad, is done mid-tempo, while the true “quiet” factor comes into play on interesting version of “My Ideal” where Dorham gingerly squeezes out the slippery wet notes, and on the sad ballad “Alone Together.” The rest of the material is done in easygoing, unforced fashion, especially the originals “Blue Friday” and the simple swinger “Blue Spring Shuffle” which is not really a shuffle. Never known as a boisterous or brash player, but also not a troubadour of romanticism — until he started singing — Dorham’s music is also far from complacent, and this recording established him as a Top Five performer in jazz on his instrument. It comes recommended to all.

This obscure Bill Evans trio set (with bassist Paul Chambers and drummer Philly Joe Jones) went unissued until the mid-’70s when the pianist decided that it was worth releasing as a fine example of bassist Chambers’ work. Very much a spontaneous set (recorded after the rhythm section made part of a record accompanying trumpeter Chet Baker), the group runs through a few standards such as “You and the Night and the Music,” “Green Dolphin Street,” and two versions of “Woody ‘N You.” Although lacking the magic of Evans’ regular bands, this CD reissue has its strong moments and the pianist’s fans will be interested in getting the early sampling of his work. A special bonus is the rare first take of “All of You” from the legendary Village Vanguard engagement by the 1961 Evans Trio (with bassist Scott LaFaro and drummer Paul Motian).

Although never formally signed, an oral agreement between John Coltrane and Blue Note Records founder Alfred Lion was indeed honored on Blue Train — Coltrane’s only collection of sides as a principal artist for the venerable label. The disc is packed solid with sonic evidence of Coltrane’s innate leadership abilities. He not only addresses the tunes at hand, but also simultaneously reinvents himself as a multifaceted interpreter of both hard bop as well as sensitive balladry — touching upon all forms in between. The personnel on Blue Train is arguably as impressive as what they’re playing. Joining Coltrane (tenor sax) are Lee Morgan (trumpet), Curtis Fuller (trombone), Kenny Drew (piano), Paul Chambers (bass), and Philly Joe Jones (drums). The triple horn arrangements incorporate an additional sonic density that remains a trademark unique to both this band and album. Of particular note is Fuller’s even-toned trombone, which bops throughout the title track as well as the frenetic “Moments Notice.” Other solos include Paul Chambers’ subtly understated riffs on “Blue Train” as well as the high energy and impact from contributions by Lee Morgan and Kenny Drew during “Locomotion.” The track likewise features some brief but vital contributions from Philly Joe Jones — whose efforts throughout the record stand among his personal best. Of the five sides that comprise the original Blue Train, the Jerome Kern/Johnny Mercer ballad “I’m Old Fashioned” is the only standard; in terms of unadulterated sentiment, this version is arguably untouchable. Fuller’s rich tones and Drew’s tastefully executed solos cleanly wrap around Jones’ steadily languid rhythms. Without reservation, Blue Train can easily be considered in and among the most important and influential entries not only of John Coltrane’s career, but of the entire genre of jazz music as well.

Ike Quebec’s 1961-1962 comeback albums for Blue Note were all pretty rewarding, but Blue and Sentimental is his signature statement of the bunch, a superbly sensuous blend of lusty blues swagger and achingly romantic ballads. True, there’s no shortage of that on Quebec’s other Blue Note dates, but Blue and Sentimental is the most exquisitely perfected. Quebec was a master of mood and atmosphere, and the well-paced program here sustains his smoky, late-night magic with the greatest consistency of tone. Part of the reason is that Quebec’s caressing tenor sound is given a sparer backing than usual, with no pianist among the quartet of guitarist Grant Green, bassist Paul Chambers, and drummer Philly Joe Jones. It’s no surprise that Green solos with tremendous taste and elegance (the two also teamed up on Green’s similarly excellent Born to Be Blue), and there are plenty of open spaces in the ensemble for Quebec to shine through. His rendition of the Count Basie-associated title cut is a classic, and the other standard on the original LP, “Don’t Take Your Love From Me,” is in a similarly melancholy vein. Green contributes a classic-style blues in “Blues for Charlie,” and Quebec’s two originals, “Minor Impulse” and “Like,” have more complex chord changes but swing low and easy. Through it all, Quebec remains the quintessential seducer, striking just the right balance between sophistication and earthiness, confidence and vulnerability, joy and longing. It’s enough to make Blue and Sentimental a quiet, sorely underrated masterpiece. 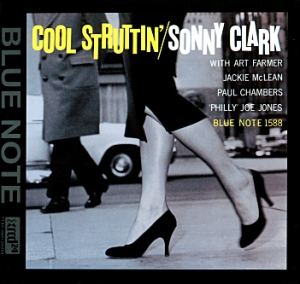 Recorded in 1958, this legendary date with the still-undersung Sonny Clark in the leader’s chair also featured a young Jackie McLean on alto (playing with a smoother tone than he had before or ever did again), trumpeter Art Farmer, and the legendary rhythm section of bassist Paul Chambers and drummer Philly Joe Jones, both from the Miles Davis band. The set begins with one of the preeminent “swinging medium blues” pieces in jazz history: the title track with its leveraged fours and eights shoved smoothly up against the walking bass of Chambers and the backbeat shuffle of Jones. Clark’s solo, with its grouped fifths and sevenths, is a wonder of both understatement and groove, while Chambers’ arco solo turns the blues in on itself. While there isn’t a weak note on this record, there are some other tracks that stand out, most notably Miles’ “Sippin’ at Bells,” with its loping Latin rhythm. When McLean takes his solo against a handful of Clark’s shaded minor chords, he sounds as if he may blow it — he comes out a little quick — but he recovers nicely and reaches for a handful of Broadway show tunes to counter the minor mood of the piece. He shifts to both Ben Webster and Lester Young before moving through Bird, and finally to McLean himself, riding the margin of the changes to slip just outside enough to add some depth in the middle register. The LP closes with Henderson and Vallée’s “Deep Night,” the only number in the batch not rooted in the blues. It’s a classic hard bop jamming tune and features wonderful solos by Farmer, who plays weird flatted notes all over the horn against the changes, and McLean, who thinks he’s playing a kind of snake charmer blues in swing tune. This set deserves its reputation for its soul appeal alone. [The CD version includes two bonus tracks: “Royal Flush” and “Lover”].

The first of two Vee Jay label dates by the acclaimed modern jazz bassist Paul Chambers is a fine exercise in hard bop, split between showcasing his compositions and famous standards. Alto saxophonist Cannonball Adderley and trumpeter Freddie Hubbard are on the front line, perhaps for the only time in their storied careers, and work well for the most part. Pianist Wynton Kelly and either drummers Philly Joe Jones or Jimmy Cobb complete the quintets. The advantage in buying this reissue is that the second CD is comprised exclusively of outtakes from the originally issued tracks, and many of them have extended solos. Of the covers, “There Is No Greater Love” features a chuckling and cajoling Adderley, very happy for the fortune smiling on him, while “Just Friends” has the two horns playing this chestnut pretty much straight, with counterpointed stop-start techniques chirping at the rhythm section, and a young Hubbard offering his best solo. “I Got Rhythm” brings Cobb to the team, as a modal base from Kelly and Chambers buoys the wailing horns. Of the originals, Hubbard and Adderley sound mismatched on the 6/8 to 3/4 calypso-swing “Julie Ann,” where their harmonics don’t quite synch up. Their teamwork pays off royally during “I Heard That” and the classic hard bopper with Cobb “Ease It,” where the tempo persists, but the horns grow quieter and quieter in mezzo piano range to near nothingness — the epitome of cool. There’s another classic here, as “Awful Mean” is emotionally neither, but instead cures Adderley’s brief once-through melody statement into a vintage shuffle. The alternate take of this one is two-and-a-half minutes longer. “I Heard That” is called a “remake” though the original is just fine, and the second “remake” of the ballad “Dear Ann” (one of three attempts included) extends Chambers on his arco bowed bass melody, both pieces adding a ramped uptempo. This recording and 1st Bassman offer different aspects of Chambers as a leader, with the latter album having him take on more responsibility as a lead melodicist. After having played with the game changing bands of Miles Davis and John Coltrane, Chambers died far too young ten years hence in January of 1969, but left behind a memorable 15-year legacy, well represented by this recording where he was in his early prime. 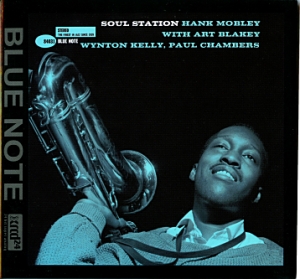 Often overlooked, perhaps because he wasn’t a great innovator in jazz but merely a stellar performer, tenor saxophonist Hank Mobley was at the peak of his powers on Soul Station. Recorded with a superstar quartet including Art Blakey on drums, Paul Chambers on bass, and Wynton Kelly on piano, it was the first album since Mobley’s 1955 debut to feature him as a leader without any other accompanying horns. The clean, uncomplicated sound that resulted from that grouping helps make it the best among his albums and a peak moment during a particularly strong period in his career. Mobley has no problem running the show here, and he does it without being flashy or burying the strong work of his sidemen. The solidness of his technique means that he can handle material that is occasionally rhythmically intricate, while still maintaining the kind of easy roundness and warmth displayed by the best players of the swing era. Two carefully chosen standards, “Remember” and “If I Should Lose You,” help to reinforce that impression by casting an eye back to the classic jazz era. They bookend four Mobley originals that, in contrast, reflect the best of small-group composition with their lightness and tight dynamics. Overall, this is a stellar set from one of the more underrated musicians of the bop era.