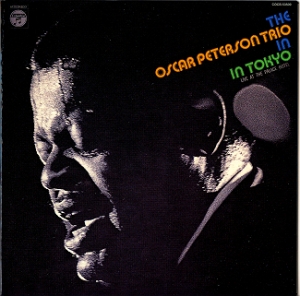 One of a handful of recordings that Oscar Peterson made for release exclusively in Japan, Last Trio: Oscar Peterson in Tokyo is a rare opportunity to hear the pianist with fellow Canadian Michel Donato on bass, plus Louis Hayes on drums. Peterson is the center of attention with his rhythm section mostly in a supporting role, seemingly as if they had not worked together extensively prior to playing at The Palace Hotel in Tokyo. Hayes had already recorded several albums with the pianist for MPS, though this seems to be one of only two recordings featuring Donato (the other being the obscure Australian CD Nightingale). Peterson does not disappoint, delivering a number of terrific performances, including a blazing “Strike Up the Band” a soulful if breezy take of Horace Silver’s “The Preacher,” and lyrical treatments of “What Are You Doing the Rest of Your Life” and his own “Wheatland.” While this trio lacks the potential of groups that featured either Ray Brown or Niels-Henning Ørsted Pedersen, it will please Peterson’s fans.