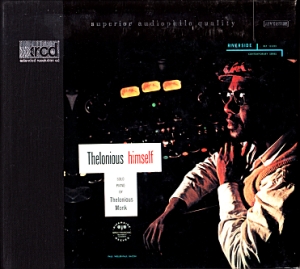 On each of his first three recordings for Riverside Thelonious Monk included a solo piano presentation, and for many listeners these were the highlights of each recital. And so it was decided that Monk’s fourth Riverside recording, THELONIOUS HIMSELF, would be composed entirely of solo interpretations…well, almost.

Those accustomed to the effusive stylings of keyboard masters such as Art Tatum might be baffled by Monk’s approach. Monk is essentially a minimalist, a virtuoso of color, accent and space, who relinquished the technical trappings of his craft in pursuit of a specific aesthetic vision. Strip away the more extravagant aspects of Tatum’s art–the showy runs, the ornate grace notes, the profuse modulations and asides–and you’re left with an advance harmonic thinker, firmly rooted in the rhythmic pulsation of stride, not unlike Monk’s “Functional.” The main difference being that where Tatum compulsively fills space, Monk (like Basie) establishes a masterful sense of implication, so that listeners finish phrases in their own minds.

Like a great actor finding heretofore obscure layers of meaning in a familiar soliloquy, Monk takes familiar themes such as “April In Paris,” “I Should Care” and “Almost Alone” and distills them down to a singing essence. Where most pianists would simply expand upon the tune (or employ the chord changes as a showcase for their own variations), Monk keeps everything focused on thematic materials. You can hear Monk working towards this goal on the work-in-progress CD bonus track of his own classic theme, “‘Round Midnight,” and on the conclusive master take. For his final selection, “Monk’s Mood,” the pianist insisted on adding bassist Wilbur Ware and an up-and-coming tenor saxophonist named John Coltrane. By allowing them to italicize and expand upon his bass lines and lead melody, Monk enabled listeners to zero in on the essence of his solo and ensemble styles.

Although never formally signed, an oral agreement between John Coltrane and Blue Note Records founder Alfred Lion was indeed honored on Blue Train — Coltrane’s only collection of sides as a principal artist for the venerable label. The disc is packed solid with sonic evidence of Coltrane’s innate leadership abilities. He not only addresses the tunes at hand, but also simultaneously reinvents himself as a multifaceted interpreter of both hard bop as well as sensitive balladry — touching upon all forms in between. The personnel on Blue Train is arguably as impressive as what they’re playing. Joining Coltrane (tenor sax) are Lee Morgan (trumpet), Curtis Fuller (trombone), Kenny Drew (piano), Paul Chambers (bass), and Philly Joe Jones (drums). The triple horn arrangements incorporate an additional sonic density that remains a trademark unique to both this band and album. Of particular note is Fuller’s even-toned trombone, which bops throughout the title track as well as the frenetic “Moments Notice.” Other solos include Paul Chambers’ subtly understated riffs on “Blue Train” as well as the high energy and impact from contributions by Lee Morgan and Kenny Drew during “Locomotion.” The track likewise features some brief but vital contributions from Philly Joe Jones — whose efforts throughout the record stand among his personal best. Of the five sides that comprise the original Blue Train, the Jerome Kern/Johnny Mercer ballad “I’m Old Fashioned” is the only standard; in terms of unadulterated sentiment, this version is arguably untouchable. Fuller’s rich tones and Drew’s tastefully executed solos cleanly wrap around Jones’ steadily languid rhythms. Without reservation, Blue Train can easily be considered in and among the most important and influential entries not only of John Coltrane’s career, but of the entire genre of jazz music as well. 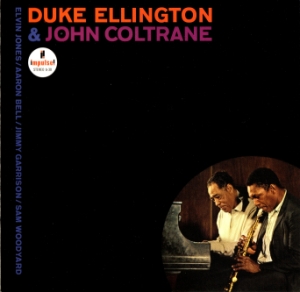 For this classic encounter, Duke Ellington “sat in” with the John Coltrane Quartet for a set dominated by Ellington’s songs; some performances have his usual sidemen (bassist Aaron Bell and drummer Sam Woodyard) replacing Jimmy Garrison and Elvin Jones in the group. Although it would have been preferable to hear Coltrane play in the Duke Ellington orchestra instead of the other way around, the results are quite rewarding. Their version of “In a Sentimental Mood” is a high point, and such numbers as “Take the Coltrane,” “Big Nick,” and “My Little Brown Book” are quite memorable. Ellington always recognized talent, and Coltrane seemed quite happy to be recording with a fellow genius.

With an artist as prolific and constantly evolving as Miles Davis, it would be futile to attempt a single CD compilation of his work without first selecting a theme to narrow things down. For BLUE MILES Columbia/Legacy has chosen a smart if unsurprising category: Miles playing tunes which, while not necessarily following the blues form per se, all evoke a kind of restless, after-hours, melancholy mood.
In drawing material from the years 1956-1967, this collection also provides a de facto cross section of Miles’ ensembles from perhaps the most fertile decade of his incredibly productive career. “Round Midnight” features the ’50s quintet that included Coltrane, Red Garland, Paul Chambers and Philly Joe Jones. “Blues for Pablo” and “The Pan Piper” are collaborations with Gil Evans, and “Blue in Green” comes from the groundbreaking KIND OF BLUE album. “Drad Dog,” with Hank Mobley on tenor and Wynton Kelly on piano, and “Basin St. Blues,” with George Coleman on tenor, are from the early ’60s, while “Circle” and “Sweet Pea” bring things up to the second classic quintet era.

~wikipedia.org
Kind of Blue is a studio album by American jazz musician Miles Davis, released August 17, 1959, on Columbia Records in the United States. Recording sessions for the album took place at Columbia’s 30th Street Studio in New York City on March 2 and April 22, 1959. The sessions featured Davis’s ensemble sextet, which consisted of pianists Bill Evans and Wynton Kelly, drummer Jimmy Cobb, bassist Paul Chambers, and saxophonists John Coltrane and Julian “Cannonball” Adderley. After the inclusion of Bill Evans into his sextet, Davis followed up on the modal experimentations of Milestones (1958) and 1958 Miles (1958) by basing the album entirely on modality, in contrast to his earlier work with the hard bop style of jazz.

Though precise figures have been disputed, Kind of Blue has been cited by many music writers not only as Davis’s best-selling album, but as the best-selling jazz record of all time. On October 7, 2008, it was certified quadruple platinum in sales by the Recording Industry Association of America (RIAA). It has been regarded by many critics as the greatest jazz album of all time and Davis’s masterpiece. The album’s influence on music, including jazz, rock, and classical music, has led music writers to acknowledge it as one of the most influential albums of all time. In 2002, it was one of fifty recordings chosen that year by the Library of Congress to be added to the National Recording Registry. In 2003, the album was ranked number 12 on Rolling Stone magazine’s list of the 500 greatest albums of all time.

Review by Stephen Thomas Erlewine ~allmusic.com
Kind of Blue isn’t merely an artistic highlight for Miles Davis, it’s an album that towers above its peers, a record generally considered as the definitive jazz album, a universally acknowledged standard of excellence. Why does Kind of Blue posses such a mystique? Perhaps because this music never flaunts its genius. It lures listeners in with the slow, luxurious bassline and gentle piano chords of “So What.” From that moment on, the record never really changes pace — each tune has a similar relaxed feel, as the music flows easily. Yet Kind of Blue is more than easy listening. It’s the pinnacle of modal jazz — tonality and solos build from the overall key, not chord changes, giving the music a subtly shifting quality. All of this doesn’t quite explain why seasoned jazz fans return to this record even after they’ve memorized every nuance. They return because this is an exceptional band — Miles, Coltrane, Bill Evans, Cannonball Adderley, Paul Chambers, Jimmy Cobb — one of the greatest in history, playing at the peak of its power. As Evans said in the original liner notes for the record, the band did not play through any of these pieces prior to recording. Davis laid out the themes before the tape rolled, and then the band improvised. The end results were wondrous and still crackle with vitality. Kind of Blue works on many different levels. It can be played as background music, yet it amply rewards close listening. It is advanced music that is extraordinarily enjoyable. It may be a stretch to say that if you don’t like Kind of Blue, you don’t like jazz — but it’s hard to imagine it as anything other than a cornerstone of any jazz collection. [Legacy’s greatly expanded 50th Anniversary Collector’s Edition was issued in 2008.]

Although they had made a few slightly earlier cuts that would later be issued on Columbia, the first full-length album by the Miles Davis Quintet is quite intriguing in that it gives one a look at tenor saxophonist John Coltrane when he still had a hesitant style. This audiophile CD reissue has the same music that is currently available on an Original Jazz Classics set: five jazz standards plus “The Theme.” Unlike Coltrane, who would develop rapidly within the next year, Miles was already very much in his prime, sounding quite lyrical on “Just Squeeze Me” and “There Is No Greater Love,” and the classic rhythm section (pianist Red Garland, bassist Paul Chambers, and drummer Philly Joe Jones) was quickly starting to gel.

John Coltrane had yet to move into his modal post-bop phase in 1958 when he recorded a session for Prestige Records on July 11 with trumpeter/flügelhornist Wilbur Harden, pianist Red Garland, bassist Paul Chambers, and drummer Jimmy Cobb, the results of which were issued in 1962 as Standard Coltrane. His groundbreaking modal work with Miles Davis on Kind of Blue was still a few months into the future, which makes this set more historical than vital or transitional, although it’s pleasant enough, featuring Coltrane on several standards, including a ten-plus-minute version of “Invitation.” Other Coltrane material from this 1958 Prestige era ended up on the albums Stardust (1963) and Bahia (1965), and all of it, including these four tracks, has been collected on The Stardust Session from Prestige Records, which is probably the way to go.