Review by Scott Yanow ~allmusic.com
Just prior to signing with RCA/Novus, John Pizzarelli recorded two sets for Chesky that featured him playing in the swing style that he would soon make quite popular. Although joined by all-stars (pianist Dave McKenna, bassist Milt Hinton, drummer Connie Kay, his father, guitarist Bucky Pizzarelli, and flugelhornist Clark Terry) rather than his regular trio, Pizzarelli’s likable vocals and relaxed guitar solos are not overshadowed. In fact, this is a delightful date, with memorable renditions of such songs as “I’m An Errand Boy for Rhythm,” “Lady Be Good,” “The Best Man,” “Gee Baby Ain’t I Good to You” and “Candy.” Easily recommended to John Pizzarelli fans.

* Original source was a digital download in 24bit-96kHz; and this share is a self-made imitation CD (converted to redbook standard, 16bit-44.1kHz); which can easily be burned as an “Audio-CD” to an empty media. 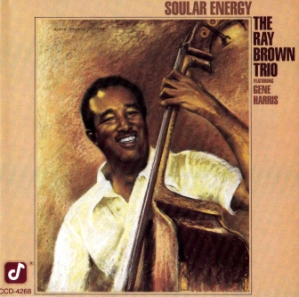 Review by Scott Yanow ~allmusic.com
This album is important as an early milestone in pianist Gene Harris’ second career. Harris, who had led the popular Three Sounds in the 1960s, had been living in obscurity in Boise, ID, for several years before he was urged by bassist Ray Brown to come to the West Coast for some recording sessions. Harris became a permanent member of Brown’s regular trio for quite a few years before launching his own quartet. He had lost none of his technique, soul, or swing in the interim, as he shows throughout this fine release. Seven of the eight numbers (highlighted by “Exactly Like You,” “Teach Me Tonight,” and “Sweet Georgia Brown”) feature Brown, Harris, and drummer Gerryck King playing soulful bop, while “Mistreated But Undefeated Blues” adds guitarist Emily Remler and the tenor of Red Holloway. An excellent effort.

* Original source was a DVD audio rip in 24bit-192kHz; and this share is a self-made imitation CD (converted to redbook standard, 16bit-44.1kHz); which can easily be burned as an “Audio-CD” to an empty media.

Review by David Schiff ~amazon.com
This is Chet Baker near the end of his career, when his performances were often erratic. But here his horn sounds great. His voice, however, is that of a broken man, but in an odd way that adds to the beauty of the recording.

Review by Scott Yanow
Pianist George Shearing and singer Ernestine Anderson (who had teamed up briefly at the 1987 Fujitsu-Concord Jazz Festival) collaborated on this full-length Concord release. With strong assistance from bassist Neil Swainson and drummer Jeff Hamilton, Shearing and Anderson mostly stick to standards and their versions uplift the veteran songs. “Body and Soul” is taken as a vocal-piano duet, while “The Best Thing for You” is given an instrumental treatment. Other highlights include Anderson’s vocals on “I’ll Take Romance,” a heartfelt “I Remember Clifford,” “On the Sunny Side of the Street” and “Some Other Time.” Perfect Match is an excellent outing for all concerned.

* Original source was a vinyl-rip in 24bit-96kHz; and this share is a self-made
imitation CD (converted to redbook standard, 16bit-44.1kHz); which can easily
be burned as an “Audio-CD” to an empty media. 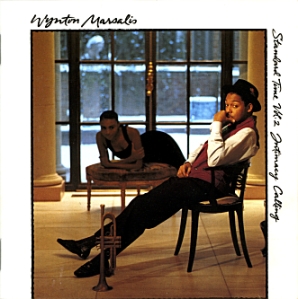 Review by Scott Yanow ~allmusic.com
Wynton Marsalis’s second of three standard albums was actually released after the third volume. On most of the selections, the brilliant trumpeter is heard in excellent form with his quartet (comprised of pianist Marcus Roberts, bassist Reginald Veal or Robert Hurst and either Herlin Riley or Jeff Watts on drums); tenorman Todd Williams helps out on “I’ll Remember April” and altoist Wes Anderson is also added to “Crepuscule with Nellie.” Marsalis’s tone really makes the ballads worth hearing, and his unusual choice and placement of notes keeps the music stimulating. This mostly bop-oriented set is rounded off by a jaunty version of “Bourbon Street Parade.”

Recorded digitally at BMG Studio A, in New York City;
between September 1987 and August 1990.

Review by Thom Jurek ~allmusic.com
First off, these “Lost Sessions” were never actually lost. The music here was supposed to be released as the Stan Getz Quartet’s first issue on A&M, and for the usual record company reasons, it was shelved instead. The tapes were in the vault and catalogs, so it’s not like they were found in someone’s closet. The bottom line is that Getz, already ill at this point, still had the goods. Produced by Herb Alpert (a genius in his own right even if his records don’t always hold up), the bossas here are tough, innovative jazz tunes mainly written by Getz’s pianist, Kenny Barron. Don’t look for the gentle side of Getz that was so beautifully displayed on his early bossa records with Charlie Byrd and Antonio Carlos Jobim. Instead, this is the man who had reinvented his playing technique. With a strong foil in Barron, Getz was free to explore his form of melodic improvisation to a fuller and wider extent, which is evident if you simply check out his solos on Barron’s “Sunshower” and “El Sueno,” and Mal Waldron’s classic ballad “Soul Eyes.” Interestingly, this was Barron’s date as much as it was Getz’s. His compositions and musical direction are key here, and he was trying to get deeper into and stretch the samba groove in his writing. Finding Getz in such an adventurous space in his playing allowed for this. With a rhythm section that includes bassist George Mraz and drummer Victor Lewis, this disc is essential not only for fans of Getz and Barron, but for real jazzheads.

Review by Ken Dryden ~allmusic.com
The Bill Evans Trio’s 1973 concert in Tokyo was his first recording for Fantasy and it produced yet another Grammy nomination for the presentation. With bassist Eddie Gomez and drummer Marty Morell, this straight reissue of the original LP mixes offbeat songs with overlooked gems, familiar standards, and surprisingly, only one Evans composition, the demanding “T.T.T.T. (Twelve Tone Tune Two).” Bobbie Gentry’s “Mornin’ Glory” was an unusual choice to open the performance and seems a bit conservative for Evans. The adrenaline picks up considerably with his mid-tempo waltzing take of Jerome Kern’s “Up With the Lark” and a driving “My Romance.” Evans also revisits the twisting Scott LaFaro tune “Gloria’s Step,” which showcases both Gomez and Morell. The closer, “On Green Dolphin Street,” is given a slight bossa nova flavor and isn’t nearly as aggressive as most of the pianist’s live recordings of this popular standard. Although this CD doesn’t rank among the Top Five live dates recorded by Bill Evans, it should be considered an essential part of his discography. It seems odd that no additional music turned up for this reissue, as the concert is just under an hour long; all nine tracks are included in the boxed set The Complete Fantasy Recordings.