This title provides ample evidence why Cannonball Adderley (alto sax) is considered one of the masters of his craft. Here he joins forces with Modern Jazz Quartet co-founder Milt Jackson (vibes) to create a variety of sonic atmospheres. They are backed by the all-star ensemble of Wynton Kelly (piano), Percy Heath (bass), and the one and only Art Blakey (drums). The moody “Blues Oriental” opens the set with Jackson immediately diving in with his trademark fluid runs and shimmering intonation. Adderley counters with a light and lively line that weaves between the rhythm section. The optimistic “Things Are Getting Better” is a good-natured romp as the co-leads trade and cajole each other into some downright rollicking exchanges. This directly contrasts with the sultry “Serves Me Right,” which allows the combo members to demonstrate their collective musical malleability. The interaction between Adderley and Jackson sparkles as they entwine their respective playing with an uncanny singularity of spirit. The cover of Dizzy Gillespie’s “Groovin’ High” contains another spirited performance with some thoroughly engaging improvisation, especially during Adderley’s voracious solos. “Sidewalks of New York” bops freely as Jackson unleashes some sublime licks against a hearty and equally boisterous sax. Adderley’s “Sounds for Sid” demonstrates his uncanny ability to swing with a strong R&B vibe. With drop-dead timing and profound instrumental chops, this cut is undoubtedly one of the best from Adderley’s earliest canon. The album concludes with a jumping reading of Cole Porter’s “Just One of Those Things.” While Wynton Kelly has been uniformly solid, his interjections stand out here as he bridges and undergirds the two as they banter with flair and aplomb. When Things Are Getting Better was issued on CD, two bonus tracks supplemented the original seven-song running order. These consist of alternate takes of “Serves Me Right” and “Sidewalks of New York.” In the case of the former, it can be reasonably argued that this outtake might emotively best the version initially chosen as the master. This disc can be recommended without hesitation to all manner of jazz enthusiast, as it quite literally offers something for every taste. 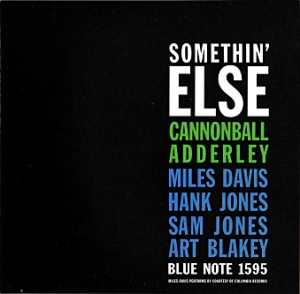 It isn’t too difficult to understand why MFSL considered this album to be a worthy candidate for an Ultradisc reissue — aside from Cannonball Adderley, you have a lineup that includes Miles Davis, Hank Jones, Sam Jones, and Art Blakey. This is a group that could take on a Barry Manilow number and turn it into a jazz masterpiece. MFSL have done the purchaser a favor, too, by including an additional track that was left off the original album. This sixth track, “”Alison’s Uncle,”” closes out Somethin’ Else on a high note, changing the flow of energy in an interesting way (purists can still finish up on a quieter note, as with the original, by programming “”Dancing in the Dark”” as the final track). In many ways it’s a surprise that this track was left off originally — it’s an excellent piece, with Adderley and Davis trading licks and solos while Jones and Blakey keep pace. Blakey also takes some terrific solos. The remastering job is the usual superb MFSL effort, producing clear sound with almost no background noise. Due to the original recording (made in 1958), Davis’ trumpet sometimes seems a little shrill and metallic, but it’s not an overwhelming problem — certainly not when you consider Davis’ style. Altogether, an excellent addition to any jazz collection.

Often overlooked, perhaps because he wasn’t a great innovator in jazz but merely a stellar performer, tenor saxophonist Hank Mobley was at the peak of his powers on Soul Station. Recorded with a superstar quartet including Art Blakey on drums, Paul Chambers on bass, and Wynton Kelly on piano, it was the first album since Mobley’s 1955 debut to feature him as a leader without any other accompanying horns. The clean, uncomplicated sound that resulted from that grouping helps make it the best among his albums and a peak moment during a particularly strong period in his career. Mobley has no problem running the show here, and he does it without being flashy or burying the strong work of his sidemen. The solidness of his technique means that he can handle material that is occasionally rhythmically intricate, while still maintaining the kind of easy roundness and warmth displayed by the best players of the swing era. Two carefully chosen standards, “Remember” and “If I Should Lose You,” help to reinforce that impression by casting an eye back to the classic jazz era. They bookend four Mobley originals that, in contrast, reflect the best of small-group composition with their lightness and tight dynamics. Overall, this is a stellar set from one of the more underrated musicians of the bop era.